Long before Boone County, Kentucky was the bustling county that we know it as today, Paleo Indians roamed this area, farmed along the Ohio River, and all throughout the mid west where they followed Ice Age animals to the salt spings at Big Bone Lick. These Native Americans lived in the Ohio River Valley between 700 B.C. to A.D. 400 during the Woodland period. The first primary Native American culture in the Boone County was the Adena Culture, also known as the Moundbuilders. They were called this for the many burial mounds that they built around the area which played an enormous role in their social, economic, and religious lives. The Adena peoples were mobile hunter-gatherers so they did not settle in one place for long periods of time, contrary to the mounds where they buried their loved ones and their valuable belongings. 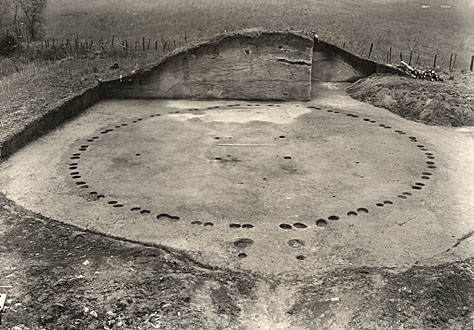 The Adena culture used circular paired-post enclosures made out of wood for ritual or ceremonial structures. The walls of a circular structure was made of mud-like cement for support that looked like a standing screen, rather than a solid wall. Archaeologists believe these structures were used for important rituals because of the fire basins, cremated remains, and in-the flesh burials found inside them. Benches or seats can be found along a section of the perimeter, indicating the special ceremonies. The ceremonies consisted of displaying the dead, cremating the individuals, and burying the dead. Often times in mounds the burial sites were layered meaning multiple ceremonies took place in the same location. However, these rituals did not happen near the site of the Adena village. After the Adena were through with their structure, they would burn down the circular paired-post enclosures and create a mound feature for those who displayed importance in the community.1) 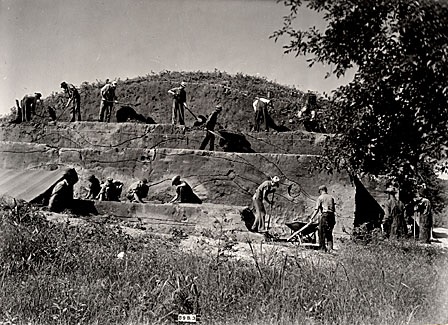 Adena groups often times buried more than one person inside a mound. They would either cremate or bury bodies inside a pit then build the mound over the graves. Larger mounds indicated multiple burials, whereas, smaller mounds showed small, one-person burials. With every addition of a burial, the mound would become larger due to piled soil on top of each grave. To the naked eye, we would view these mounds as small hills, with no knowledge of artifacts or graves within it but some mounds reach as high as 75 feet. Most mounds are found overlooking the Ohio River and its tributaries. Besides graves, inside the mounds archaeologists have found fire pits, rock piles and wood logs associated with the ceremonial structures being burned at the time of the special ritual taking place. Artifacts such as pottery, knives, jewelry, and mica and copper items were found inside the burials too.2)