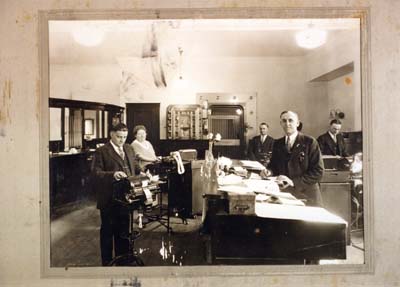 This 2-story Neo-Classical Revival-style buff-colored commercial building (c. 1924) has a symmetrical facade, with an extended section with stylized pilasters. There is some brick corbeled ornamet, and a modest cornice on the facade but not on the side and rear elevations. BOONE COUNTY DEPOSIT BANK is inscribed in the fascia. A marquee canopy is suspended by original metal supports over the center bays of the facade. The Boone County Deposit Bank, with the Peoples Deposit Bank, BE-139 was one of two financial institutions in the nineteenth and early twentieth century Burlington. Judge Nathaniel Riddell served as president of both. This building was erected on the site of the The Old Boone County Clerks Building, which was occupied by the bank from 1889 until 1924.