The Boone County Infirmary was built sometime in the 1870s to help the indigent of the area, who were unable to care for themselves. It was located right off Idlewild Road in Burlington. Though there is a mention of a “county poor house” in court orders in the 1860s, no earlier location has been yet determined. 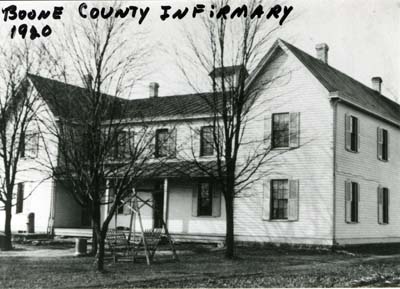 The 24 room building housed needy men, women and children for years, averaging 10-20 residents at a time, per the census records from 1880-1940. The population at the infirmary was integrated from 1880 forward. Census year 1910 was the most populous, with 27 residents, ranging in age from infancy to 89 years old.

In 1970, the building took on the role of children's home, and was named “Maplewood” for the trees on the property. The old building was torn down in 1986, but the property still serves as a children's residential treatment center, and is managed by the Children's Home of Northern Kentucky.

Browse photographs of the Infirmary