Bruce Ferguson was born in Covington, KY in 1929, son of Walter and Shirley Rice Ferguson. Bruce studied law and Agriculture at the University of Kentucky from 1947-1951. In 1967, Bruce earned a BA in history and political science from Thomas More College in Crestview Hills, KY.

His long political career began with the Boone County Board of Education, where he first served from 1955-1961. In 1964, Bruce was elected County Judge for Boone County. He served first until 1982, then returned to the position from 1986-1992.

Some of his landmark accomplishments during his tenure as County Judge included: helping to spearhead the Northern Kentucky Tri-County Economic Development Corporation, the county's first hospital as well as a county water system.

In 1992, Bruce accepted a position as commissioner of the Department of Local Governments, serving until 1996, when he returned to Boone County and served on the Boone County Soil Conservation Board, retiring in 2001. 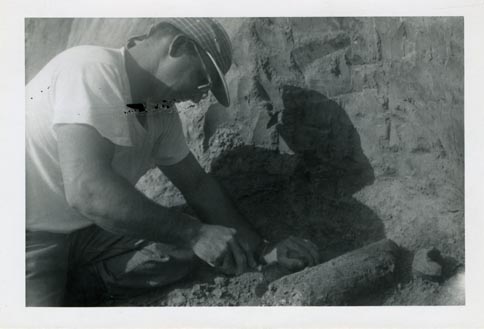 Bruce Ferguson was an active member of the community and contributed as a member of a number of civic groups. In addition to his work on the Boone County Conservation Board, Bruce contributed to the history of Boone County in many ways throughout the years. He served as president of the Big Bone Historical Association in its early days, and was instrumental in the effort to establish Big Bone Lick State Park. Ferguson also gave many presentations on Boone County's history in the area to groups at meetings of historical groups and societies, as well as local libraries.

Bruce Ferguson and his wife Elizabeth (Reynolds) were married for more than 50 years, and had five children together. Ferguson passed away in Boone County on May 3, 2015, at the age of 86.