You may know about Burlington Elementary School’s Fall Parade of Characters which happens every Halloween—maybe you or your kids were part of that parade not too long ago—but did you know that this tradition goes back to the 1930s when the school was known as Burlington High School? 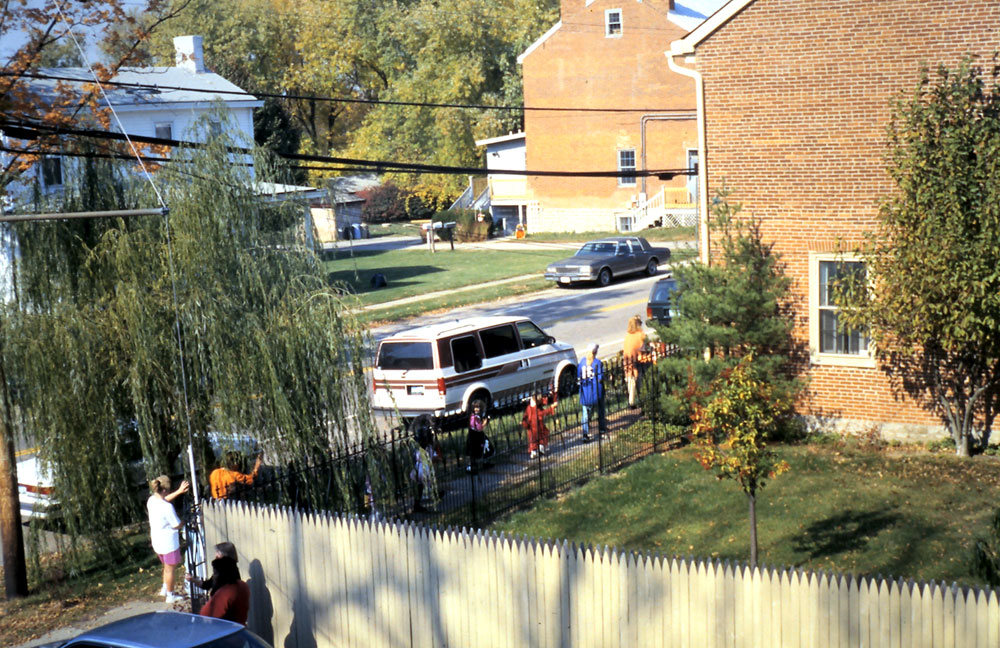 As early as 1937, the parade was mentioned in a Boone County Recorder article about the Burlington P.T.A.’s “usual Hallowe’en party.” (The apostrophe between the two e’s, a holdover from when the holiday was called “All Hallows Even,” appears into the 1960s.) Since it is referred to as the “usual” party, it is most likely that the school had the party for several years before it was publicized in the newspaper.

Around this time, Halloween (or Hallowe’en) was a stressful time for most people in the community. Articles in the Boone County Recorder in 1941 urged kids not to partake in “Cabbage Night” or deface store windows with “obscene words.” One editorial from 1935 urges readers (in all caps!) to “HAVE A GOOD TIME, BUT ABOVE ALL DON’T BE DESTRUCTIVE.”

In response, local schools and organizations offered their own Halloween parties as an alternative to a night of trouble-making. In 1937, the Mothers Club of Burlington planned a party for not only the students but also members of the surrounding Burlington community, where they awarded prizes for adults and children for both the “tackiest” and the “prettiest” costumes. The newspaper stated that over 200 attended in costume and many well-known folks from the community were present such as the County Judge and Sheriff. Afterward, the newspaper declared the party was a “Huge Success,” and said, “The parade in costume was the colorful event which all were glad to see and take part in.”

The Burlington School P.T.A. eventually began to sponsor the party, which took place at the school in the evening, with the “Grand Parade” or “Grand March,” as it was known at the time, happening around 8 or 9 pm. The party also included cake walks and other games, but the costume parade and contest were the main attraction. In 1942, the costume parade added a theme, encouraging folks to dress as characters from books or historical figures, and in 1944, with World War II still raging, a prize was added for the most patriotic costume. Adults also got to join the fun—in 1949, there were two “Grand Marches,” one for children and one for adults!

Then, in 1952, the Burlington School P.T.A. held a Fall Festival on November 22, “instead of the annual Hallowe’en party.” Despite bad weather, the festival was well attended, but people must have missed the Hallowe’en aspect, because the following year, in 1953, the date for the Fall Festival was changed back to October. By the 1960s, prizes were awarded for costumes in three age categories. Interestingly, the admission price in 1961 was the same as it was in the 1940s: a nickel for those with a costume, and a dime for those without!

Eventually, the school moved the parade during school hours and had the students march from the school, through the side streets to Burlington's Courthouse where members of the community could line-up and cheer for them as they marched in their costumes.

The Fall Parade of Characters tradition has always been an event for the community, even with growth and development—Burlington Elementary School now has close to 900 students—and has demonstrated the community’s wonderful relationship with the school. The students and community members seem to love taking part of this tradition, which has lasted almost a century.